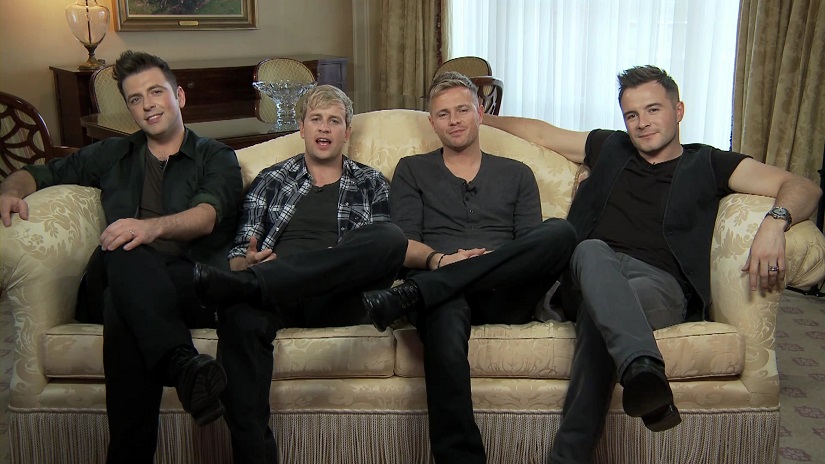 Who says a split or hiatus truly means the end? Witnessing your favourite group announce that they are splitting or going on hiatus is often heart-breaking. But witnessing them get back together after years apart? Waking up to the news that one of your childhood favourite groups are releasing new music? There’s no better feeling.

We’ve witnessed many boybands split up and get back together over the years with some of them having even MORE success the second time around. Boyzone for instance have reunited a number of times, selling out greatest hits tours and dropping surprise singles.

Here are some of the biggest boyband comebacks:

Known for songs ‘Swear It Again’, ‘If I Let You Go’ and ‘Flying Without Wings’, Irish group Westlife, who were originally made up of Nicky Byrne, Brian McFadden, Kian Egan, Mark Feehily, and Shane Filan formed in 1998.

However, in 2004, Brian decided to leave the band to spend more time with his family and has no plans to rejoin the group despite being on ‘good terms’ with the boys.

Before their split in 2011, the group released 13 albums, embarked on 12 world tours, earned 28 platinum discs and sold more than 55million records across the globe.

In October 2018, Nicky Byrne, Kian Egan, Mark Feehily, and Shane Filan reunited on the band’s 20th anniversary and released comeback album ‘Spectrum’ with the help of Ed Sheeran. They also announced a huge tour including two Belfast dates and a massive gig at Croke Park.

In 0ctober 2021, the boys announced that their new album ‘Wild Dreams’ will be out on November 26th and a long awaited 2022 tour.

Also read: ” Westlife surprised the band have such a strong fanbase after all these years “

Even though Take That’s split in 1996 caused many heartbroken fans to take the day off school (a helpline was also created), they DELIGHTED us all in 2005 when they confirmed that they will be ‘back for good’ with comeback single ‘Patience’.

Even though Robbie Williams has made a few appearances with the group since the comeback (he originally refused to come back after he left in 1995), Take That currently consists of Howard Donald, Mark Owen and Gary Barlow. Jason Orange also left the band for good in 2014. Take That are still very much together and their comeback is considered to be one of the most successful of all time.

Irish boyband Boyzone made their way into our hearts when they were formed in 1993, but it was single ‘Love Me For A Reason’, released in 1994, that broke them into the British charts. The band was originally made up of Keith Duffy alongside Michael Graham, Ronan Keating, Shane Lynch and the late Stephen Gately – who sadly died in 2009 aged 33.

Boyzone split in 1999 to pursue solo projects. They did a brief tour in Ireland in early January 2000 before going their separate ways.

They reformed in 2007, announcing a tour for the following year. Boyzone toured again in 2009, their last as a five.

In 2018, Boyzone released album ‘Thank You and Goodnight’ with artists Sam Smith and Ed Sheeran writing for the band’s final album which also marked their 25-year anniversary.

Despite the band saying they will be splitting for good following their ‘Thank You and Goodnight’ tour, lead singer Ronan Keating has admitted that the Boyzone book will never be fully closed and there’s even talk of a Boyzone movie!

American boy band Backstreet Boys, made up of Nick Carter, A.J. McLean, Kevin Richardson, Brian Littrell and Howie Dorough, ruled the charts in the late 90s with hits such as ‘I Want It That Way’ and ‘Everybody’.

In 2006, Kevin decided to leave the band to pursue other interests and although the band continued without him, it took until 2012 for Kevin to rejoin them.

The group enjoyed another stint at the top of the charts when they celebrated their 20th anniversary in 2013 and have since made surprise comebacks every few years to the delight of their fans.

In 2021, the band officially announced that they had been working on a Christmas album, but the album has been postponed until 2022.

Disney channel favourites the Jonas Brothers, made up of Joe, Nick and Kevin, enjoyed HUGE success when they burst on the pop/rock scene in 2005 but they also endured a lot of drama.

In 2013, brothers Nick Jonas and Kevin Jonas decided to take a hiatus from the group and cancelled 23 tour dates between October and December, citing a “deep rift within the band” over “creative differences.”

However, in February 2019, the Jonas Brothers announced their comeback via social media and released single ‘Sucker’.

The X-Factor has produced some pretty impressive groups over the years. In 2008, all singing and dancing JLS, consisting of Aston Merrygold, Marvin Humes, Oritse Williams and JB Gill, were born.

The four-piece enjoyed huge success with singles ‘Beat Again’ and ‘Everybody in Love’ but announced their intention to split in 2013 with a farewell tour and compilation album.

However, the boys delighted fans in 2020 when they revealed plans to reunite after seven years apart. However, their comeback ‘Beat Again’ tour was delayed due to the coronavirus pandemic and was rescheduled to October 2021.

They also released a comeback single ‘Eternal Love’ written by the one and only Ed Sheeran.