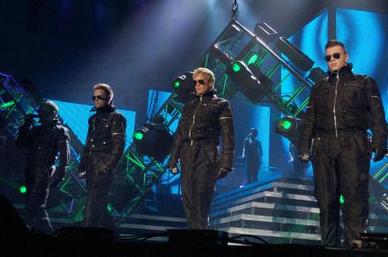 The Back Home Tour was in support of Westlife’s 9th studio album, Back Home. The band has been touring the United Kingdom, Ireland and New Zealand. The tour was seen by 385,000 fans.

The tour was divided into two legs. The first leg kicked off in Belfast on 25 February and ended in London on 29 March 2008. The second leg started on a four-day visit to Australia for the promotion of the album and ended on 28 June 2008 at the Plymouth Argyle Football Club in England.

The 28-page tour programme was measuring 12″ x 12″, celebrating their 10 successful years as recording artists, crammed with stunning photos, spot lacquered images, interviews, personal messages from all 4 band members on lavish screen printed plastic pages and much more, with metallic-effect embossed outer cover. The DVD for this tour was filmed at Croke Park, Dublin on 1 June 2008.

This tour marked as the second Irish act to headline Croke Park Stadium after U2.