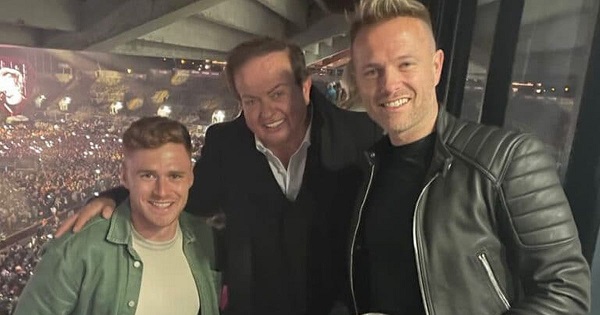 Nicky and Georgina at Ed Sheeran’s concert: Nicky Byrne has shared a rare snap with his wife and kids as they “topped off a great weekend” at an Ed Sheeran concert.

The Dancing With The Stars presenter revealed last week that his sons Jay and Rocco had turned 15.

They ended their weekend of celebrations at Croke Park seeing Ed Sheeran perform in front of thousands.

Nicky took to his Instagram yesterday to share some snaps with his family from their time at the concert.

The first picture was just of Nicky enjoying a pint with the stage in the background.

He was wearing a pair of light denim jeans along with a black top and a black leather jacket over the top.

Nicky ran into Marty Morrissey from RTE. The sports commentator took to social media to share a snap alongside Tyrone’s GAA star Conor Meyler and Nicky. who was delighted to have the chats with ‘buddies’ Nicky and Conor as they discussed who would be winning the All-Ireland Football title this year.