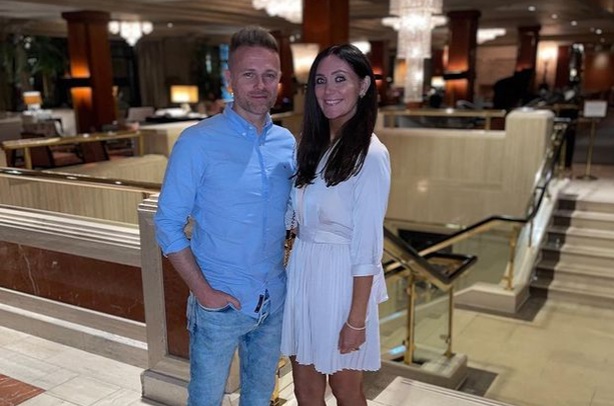 Westlife star Nicky and his wife Georgina looked fantastic as ever as they celebrated their sons Rocco and Jay’s 15th birthday earlier this week. They stepped out in style to celebrate the big day.

The Westlife singer revealed his twin boys turned 15 earlier this week, telling his fans on Instagram that the teenagers are “becoming fine young men before our very eyes”.

Now, Nicky has shared a sweet snap of him and Georgina at the birthday celebrations. He looked dapper as ever wearing a bright blue shirt and denim jeans. Meanwhile, Georgina looked simply stunning wearing a white pleated dress with a pair of dazzling gold heels. “Celebrating Rocco n Jays 15th,” Nicky captioned the post.

Nicky previously opened up about the joys of fatherhood, saying there is nothing better than seeing his kids happy and healthy as they get older. The singer is always there to give them advice because his parents always supported him during his adolescent years.

He told RSVP Magazine: “That is part and parcel of being a parent, not just because I am in a band or a TV and radio presenter. That is what mammies and daddies are there for.”

He added: “My parents were there for me, particularly when I needed them most in my teenage years.

“There is nothing better than seeing your kids happy and healthy.”

All three of Nicky’s kids have followed in his footsteps; the boys are playing soccer while Gia, aged 8, is into performing.

He said: “The kids play a lot of sport, Rocco and Jay play for St. Sylvester’s GAA club in Malahide and Rocco plays for St. Kevin’s/Bohemians in the Airtricity U/14 League.

“Gia does drama and Irish dancing as well so we are always back and forth to a million and one activities.

“I love that, there is nothing better than standing on the sideline and giving the kids your advice on the way home.”