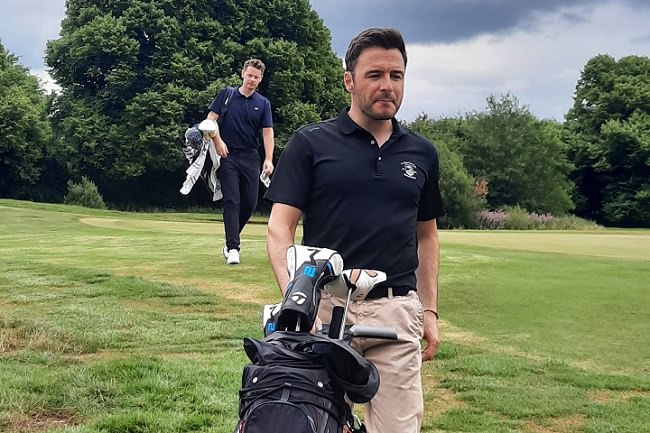 A quick 18 with Westlife’s Shane Filan – ‘Does golf help with the music? Absolutely’

The band might be back together, but that doesn’t mean Shane Filan has given up golf. It’s been quite the opposite, in fact, as the Sligo native has been able to combine his love for the game at Co Sligo’s Rosses Point links with remotely recording a new Westlife album that’s due for release later this year.

“Does golf help with the music? Absolutely,” reports Shane, who lives just three minutes from the Links. “One good thing that came out of Covid is we got to make a new album and find some new songs and we just finished it last week.

“I live very close to the course so I can go up to the putting green for half an hour and have a vocal session at 7 o’clock that evening.

“We came back in 2019, and that tour was a great success. And then the whole world shut down. We are really happy with it because we got to spend a lot of time on it, recording it in our houses and doing live Zooms to LA and London and God knows where else. I suppose Covid gave us more time to make the album in a more relaxed way, getting more involved in writing the album as a band and working with all these different producers.

“It’s an album we’re very proud of, and it’s going to be a great follow up to Hello, My Love, the single we had. That current and up-tempo sound is what we want to try and keep. The world definitely needs more up-tempo, happy songs, so we are trying to slip into that mode later on this year.

“The great thing was I didn’t have to go away to London for a week to record and be away from my kids and all the things that were important. So I got to do it in a really nice way and play a bit more golf, which was lovely. It definitely helped the handicap and the swing a little bit.”

Decent. I was off 15 for a few years when I was touring a lot and didn’t play much regular golf. But in the last year and a half, I was home a lot more, and I got my handicap down by three shots, so I was really happy with that. My driving was always in and out, but I changed driver to the new TaylorMade SIM Max in an extra stiff shaft recently. One of my mates, Gary McDermott, is the TrackMan rep for Ireland, so he got me on the TrackMan, and we worked out I had the wrong shaft. So I started hitting the ball further, and I’m a happier, better golfer because of it. Hitting it 30 yards further makes such a difference to the clubs you’re hitting in, and it all becomes that bit easier. I can now go for the seventh in two most of the time where it was a three shotter before.

2. How did you get started in the game?

I didn’t start until I was 19 or 20. I used to play Bertie’s pitch and putt on the Bundoran Road for the craic with mates when I was a teenager. But I never had a major interest in golf. But when we started to tour in around 1999, 2000, we’d be playing arenas for five or six days, staying in country hotels outside the city, like The Belfry in Birmingham. The more you woke up looking at the courses, the more you wanted to play golf. So we started as a band at a time when Tiger was dominating. That was it. I’ve had the bug ever since.

3. Choose your weapon….Driver or putter? And why?

Both. The two clubs I love are my driver and putter. I had a lesson with the new County Sligo professional, Colin Starrett, and he’s fantastic. He asked me my favourite club in the bag, and I said putter because I feel really happy with the putter in hand, and he said, right, well, let’s work on making the rest of your clubs feel happy in your hand. So he gave me a lesson, and I changed the way I hit my driver, which transformed my game. He’s an amazing pro.

It depends. If it’s windy, I want to be on a parkland, but I love links because I love being by the sea. Some of the views in Rosses Point are incredible. But then I love the tranquillity of parkland. I played Adare Manor recently, and it was just a different level of perfection.

5. When were you happiest on the golf course?

When I won my first ever competition during Open Week at Rosses Point last year. I had 39 points playing with some good mates. The feeling of winning something was pretty cool.

Probably Tiger Woods. He is just remarkable to watch. As a sporting icon, he is right up there as one of the best ever. His Masters win in 2019 was amazing.

7. Name an artist you especially admire and why.

Michael Jackson growing up. I thought he was incredible. He was the main reason I started. And Garth Brooks, the country singer. He’s someone I’d love to meet.

8. What’s your golfing ambition? Do you have one?

To get down to single figures over the next year or so. I am just a few good rounds away.

9. Name your dream fourball. And name the venue.

Tiger Woods, Dwayne Johnson and Ronaldo. And it would have to be Augusta National.

10. If you could change something about golf, what would it be?

The time it takes to play. I wish there were more team formats — foursomes and scotch foursomes. Something that speeds it up.

11. If I gave you a mulligan in your professional career, what would it be?

12. If you had just one more round to play, where would it be?

I’d love to play Augusta National. My wife organised for me to go there in 2010 for my 30th. It was just majestic. I couldn’t believe how hilly it was, but it’s the one I’d love to play.

The 13th at Rosses Point. It’s such a beautiful hole to look at, and I’ve had some great birdies and near holes-in-one there too. That view as you step up on the tee with the beach and the lighthouse, it’s Sligo in a nutshell. And 13 is my lucky number.

14. If you could change one thing about yourself, what would it be?

When I come home from tour, I have a tendency to be a bit messy, leaving stuff lying around, forgetting I am not in the hotel. My wife Gillian has said it to me numerous times, ‘Shane, you are not in the hotel now!’ I’d be a bit tidier for the missus.

15. What’s your most treasured possession (golfing or otherwise)?

My dad, Peter, passed away last year and he left me his wedding ring, which I’ve had resized. That’s the possession I treasure the most. My mum passed away before that, so I lost both my parents in the last year and a half. It’s been a tough time, but you have to get on with it.

16. If you could change something about your golf, what would it be?

I’d love to hit it 360 off the tee. But hit the ball further would have to be it.

17. Who’s your favourite golfer of all time? Why?

Definitely Tiger Woods. I got to meet him at the JP McManus Pro-Am in Adare in 2010. He was really nice to us. A good night.

18. What’s your idea of perfect happiness.

It’s hard to beat being with my wife and kids, having dinner or a barbecue on a sunny day. We live near the water here, and when the sun is shining, it’s hard to beat, as they say. That said, I’ve never had a hole-in-one. I’m still waiting for that perfect moment of golf happiness.

Shane Filan Golf – ‘Does golf help with the music? Absolutely’