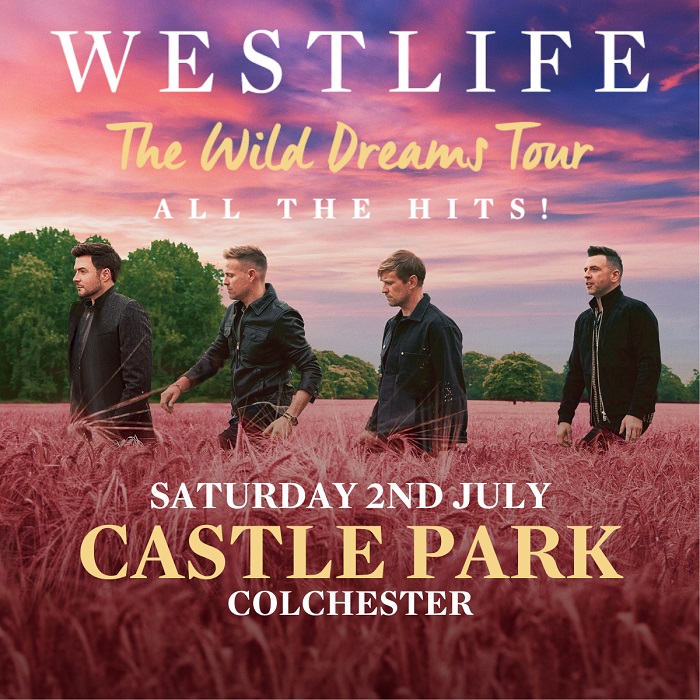 Performing their greatest hits ‘Swear It Again’, ‘Flying Without Wings’ and ‘World Of Our Own’ as well as, fresh pop anthems from their most recent album ‘Wild Dreams’.

Colchester Events is delighted to announce that one of the UK’s biggest-selling groups of the 21st century, Westlife, will perform at Colchester’s Castle Park on Saturday 2 July as part of their2022 ‘The Wild Dreams’ Tour.

Westlife will once again be hitting the road this year, following their record-breaking 2019 reunion tour which saw Shane, Nicky, Mark and Kian play to over 600,000 fans across 27 countries. The Irish pop kings kick off their tour next summer at the Hop Farm and will then perform at venues across the U.K. including an already sold-out headline show at London’s iconic Wembley Stadium.

The Wild Dreams Tour will see Westlife get closer to their fans than ever before, as they perform all their greatest hits ‘Swear It Again’, ‘Flying Without Wings’ and ‘World of our Own’ as well as, fresh pop anthems from their new album ‘Wild Dreams’.

The Band say: “We are incredibly excited to announce news of The Wild Dreams Tour. It feels like things are finally starting to return to normal and we can’t wait to enjoy that feeling with our amazing fans.”

“After the last 18 months, this tour means more to us than any that we’ve ever done before. It will be a massive celebration and will bring us closer to our fans than ever before. We’re planning some spectacular shows which will include all of our greatest hits and some special surprises.”

News of the 2022 tour marks the beginning of a packed schedule for Westlife who released the album ‘Wild Dreams’ in November 2021. The album includes songwriting contributions from Ed Sheeran (“My Hero”) and Amy Wadge (“Lifeline”, “Rewind”), along with production from Jamie Scott, Rami Yacoub and Steve Mac.

Shane, Nicky, Mark, and Kian have established themselves as the world’s biggest band of the 21st century, having sold over 55 million records worldwide and are the only band to have their first seven singles enter the UK chart at No.1. They also have more singles than any other artist to debut at No.1 in the UK. Overall, the band have had an incredible 14 No.1 singles, second only to Elvis Presley and The Beatles. They have had 33 No.1 albums worldwide and as a live act they have sold five million concert tickets worldwide and counting.

Cllr Sue Lissimore, Colchester Council Portfolio Holder for Commercial Services, added: “We are thrilled with today’s announcement and can’t wait to welcome Westlife to Colchester this summer.  Our blockbuster Castle Park concerts are enjoyed by thousands of people from across the region and it’s great to see the venue attracting global performers on their UK tours.

“With Wembley Stadium already sold out, I’m sure there will be strong demand for tickets, so I’d encourage fans to book early to secure their seats.”

Tickets go on general sale at colchester-events.co.uk/westlife from Friday 11 February 2022 at 10am.

Tickets can only be purchased online and are not available to book via telephone.