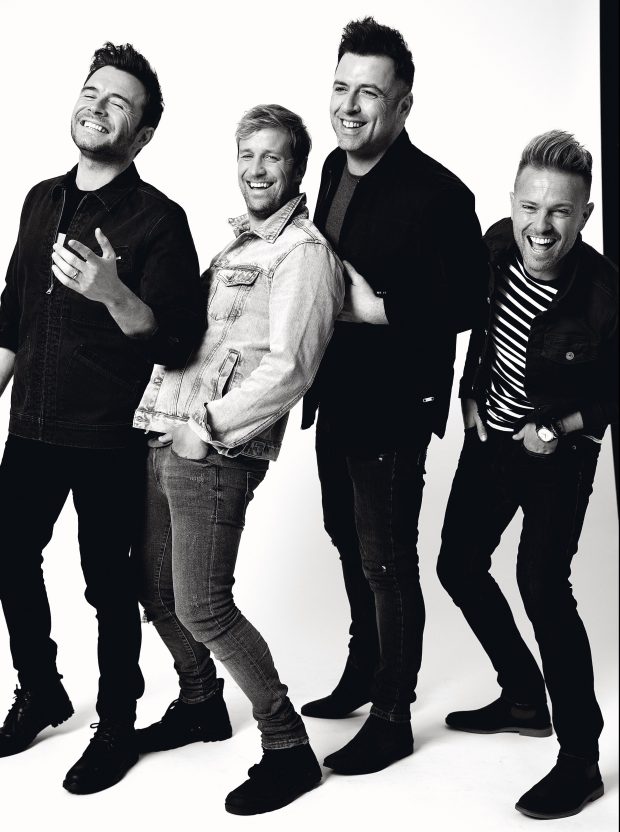 In this Westlife biography you get to know the band and their history. Formed in Sligo, Ireland in 1998, Westlife followed in the tradition of European boy bands like Take That and Boyzone. The group performed ballads and club-worthy pop songs for a devoted European audience. They became one of the continent’s most successful bands in the process. Although they never managed to find American success, Westlife released six platinum-selling records in the U.K. Eventually they sold more than 40 million albums worldwide. That helped them eclipse the popularity of pop titans like Boyzone whose lead singer had managed the band during its infancy.

Vocalists Shane Filan, Kian Egan, and Mark Feehily first performed together in another pop group, IOYOU. They experienced their first brush with success when Simon Cowell considered signing them to BMG. The group’s other singers didn’t make the cut. A new round of auditions was launched to find more capable members. Nicky Byrne and Bryan McFadden were eventually added, the group was signed. Westlife began prepping its debut album with the help of Louis Walsh and Boyzone member Ronan Keating. Their debut single, “Flying Without Wings,” entered the U.K. charts at number one in 1999. Westlife replicated that one year later with “Seasons in the Sun” and “Swear It Again.” All three songs were also released on the group’s self-titled debut album which was met with similar success and went platinum in the U.K. An American release followed in early 2000 courtesy of Arista Records.

Westlife never managed to make a dent in America’s pop scene, where national acts like the Backstreet Boys, *NSYNC, and Britney Spears reigned supreme. It was a different story in the UK though, where the group charted 14 number one singles and continued releasing hit albums. Both Coast to Coast and A World of Our Own went multi-platinum. And the group celebrated its success by releasing a hits compilation, Unbreakable, Vol. 1: The Greatest Hits, in 2002. Turnaround followed in 2003 and fared similarly well, but Bryan McFadden nevertheless left the lineup one later year in the hopes of launching his own career. “Real to Me,” his first single as a solo artist, topped the charts in 2004.

Westlife continued touring after McFadden’s exit and released Allow Us to Be Frank, a tribute to the Rat Pack, in late 2004. They returned to their contemporary pop formula with 2005’s Face to Face — their biggest-selling album in three years — and continued releasing material throughout the rest of the decade, including The Love Album, Back Home, and Where We Are.

In November 2010, Westlife released Gravity, their tenth studio album. Following the release of single “Safe,” the band announced they would be leaving Simon Cowell’s label Syco. Citing a lack of support from Cowell following Syco’s unwillingness to release a second single from Gravity the group signed a one-album deal with RCA Records. A Greatest Hits album was released a year after Gravity. It featured four new songs that would turn out to be the band’s last as they announced their split following a farewell tour. Sold out in minutes, the tour was a huge success. It ended in June of 2012 at Croke Park Stadium in Dublin Ireland in front of a crowd of over 80,000.

Over the next few years, each member focused on his own career and families, taking timeouts, releasing solo albums, and appearing on TV and reality shows. In 2018, after numerous rumors, the group announced that a new album was in the works alongside a tour. Returning to the studio with previous collaborator Steve Mac — who had also built up a successful songwriting partnership with Ed Sheeran — Westlife delivered their 11th studio album, Spectrum, at the end of 2019. The album included collaborations with James Bay as well as Sheeran on the singles “Hello My Love” and “Better Man.”

In 2022 Westlife will hit the road with a new tour that will take them to England, Ireland, Scotland and Denmark.