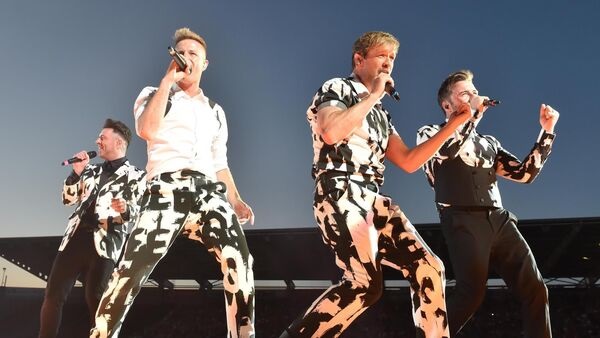 On the first of their two gigs in Cork, Westlife rolled out the hits on a scorching evening

It was a scorching evening in Cork as Westlife took to the stage for their first Páirc Uí Chaoimh gig in their 24-year history.

Páirc Uí Chaoimh was packed with devoted fans willing to brave the heat to see their beloved quartet croon through hit after hit. From Cork city centre to the Marina, there was an almost-hen party feeling in the air as thousands of people made their way to the venue. Light, flowing dresses and denim shorts were the go-to style, with many groups wearing custom matching t-shirts. Friday night was party night in the city and we were ready to dance under the sun.

Emeli Sandé and Wild Youth entertained the stadium as warm-up acts, taking to the stage at 6.30pm and 7.30pm respectively, before Westlife kicked off the night at 9pm with ‘Starlight’ from their 2021 album Wild Dreams, later rolling back the years with some of their most beloved tracks. There was some much-appreciated shade from the lowering sun for the performers and those at the western half of the stadium when a monochrome-wearing Westlife came on stage to a burst of multi-coloured confetti.

“You’re very welcome to the Westlife Wild Dreams Tour 2022. Are you ready to have some fun, Cork?” Marc Feehily asked. Westlife, over two decades later, are unapologetically a stereotypical boy band. “Who wants a key change?” Feehily joked during ‘Fool Again’.

Often described as a cover band in their formative years, Westlife proved they know a thing or two about reworking others’ classic hits and working an audience. “Any uptown girls in the house?” they said before the crowd was treated to Billy Joel’s ‘Uptown Girl’. An energetic remix of some classic Abba hits was a huge hit too with the screaming and dancing crowd.

Throughout the night the four men captivated the audience and moved seamlessly from upbeat, optimism to ’90s nostalgia. Their perfectly choreographed walking, dancing, clapping, and swaying movements were reminiscent of their early music videos. Many of the attendees were in school when Westlife catapulted to fame, becoming Ireland’s most successful boyband, and a walk down memory lane was clearly appreciated by them. Hits performed included Queen of My Heart, When You’re Looking Like That, and Flying Without Wings.

It was an emotionally wrought two hours as for much of the audience the gig was their first concert since before the pandemic. Indeed, tickets for The Wild Dreams Tour, originally called the Stadiums in the Summer Tour, initially went on sale in September 2019 and the concerts were postponed for both 2020 and 2021.

It was a reality acknowledged from the stage by Filan. “Honestly, guys, we’ve been waiting to do this show for a very long time, as you well know. It feels so good to be here. It’s so good to see everyone together again, smiling, some people crying.”

He said they were grateful “to be in Cork, in this massive stadium. It’s going to be a great show, we promise you that. We’re going to have a lot of singalongs, a lot of memories.”