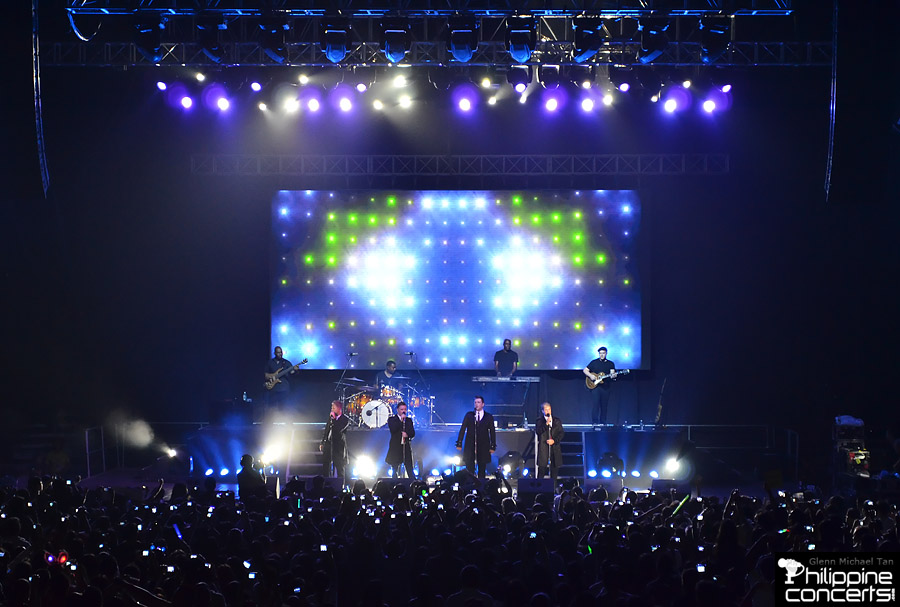 After over a dozen years and 11 albums, these Irish boys made their 4th Manila concert last September 29 at the Smart-Araneta Coliseum

The 4 Irish crooners may be the hardest working boyband on the planet. Half of whom are now fathers, performed in a massive crowd like there’s no tomorrow with a lot of costume changes, banter, surprises and non-stop hits.

Before the main event, Philippine Concerts and other media partners were invited to their Press conference held at Edsa Shangri-La Hotel in Mandaluyong City. It was originally set at 1PM but moved to 3PM because the Irish boys were not aware that there will be a presscon. As Shane Filan said “We didn’t know there will be a presscon”

Mark: “We love what we do, and we’ve always loved to be in a band, and we generally love being on stage”.

They answered all the questions from press people and left the area to have their sound check at the Smart-Araneta Coliseum.

Before the headline act, the huge crowd was treated to three supporting acts from Star Magic. First was Young JV who is making name for himself in Rap/RnB genre. His performance was immediately followed by two reality Stars Van Roxas from Pinoy Dream Academy and Piero Vergara from Starsturck.

The curtain drops, the audience scream, the spotlights robotically rotated in the venue. The group appeared with black tuxedo and faded jeans together with their entire live band. The opening song was their classic energy getter When You’re Looking Like That and followed by World Of Our Own justifying band member Mark Its hard to believe that Westlife have been together for over 12 years. It was so obvious that they love the crowd because Kian and Nicky were unstoppable in taking videos and photos of the lovely audience. Their 3rd song was a ballad called What Makes A Man and I can say that 1 of the best things on this concert was the sounds. I can hear their voices clearly. They put a balance amount of bass, drums, vocals and other instruments making it so good to our ears. As I expected, they sounded fantastic and they’re very true to their album. Safe was their 4th song and followed by their classic rendition of Home and one of their greatest hits My Love. One of the highlights of the night was when Nicky reading some the banners from the fans and few of them were also invited to join the Irish boys on stage. Some of notable banners were “Nicky, I want Twins can I have your genes?” “Mark, Kiss Me” and “Kian is it hot in here or is it just you?” The lucky fans who were chosen had their opportunity to talk to their favorite members of Westlife on stage. After that they performed Beautiful Tonight and took a quick break to prepare for their medley performances.

Kian, Shane, Nicky and Mark returned on stage wearing colorful outfits with Mickey Mouse printed on their shirts. They started with Coldplay’s Viva La Vida, Rihanna’s Only Girl (in the World)., BEP’s The Time (Dirty Bit) and a cover of Lady Gaga’s Bad Romance making the crowd party like no other at the concert of Westlife. After quick costume changes they sang their popular hits and covers like Season In The Sun, You Raise Me Up, I’m Already There, I Will Reach You and their very own Flying Without Wings. I also noticed that the boys equally share the limelight and had their own moments on this tour. They went to the backstage to prepare for their encore performance.

The crowd shouted “Westlife, Westlife!!!” “We want more, we want more!!” And as they promised Westlife came back and performed their closing songs What About Now and Uptown Girl.

There were a lot of costume changes, banters/audience conversations, confetti plus a full live band all of which added up to a fan-pleasing spectacular night. Thankfully, both band and audience has an equal tremendous amount of energy, self-confidence, and pride in their music, which led to their live performance being one of the best sounding concerts I’ve witnessed in years. The band was both focused to put on a show and playing music. Their live performances were very true to what’s presented to their records. The Gravity Tour in Manila was a very impressive show from start to finish, and it showed from over 10000’s of screaming fans who appreciated every single second of the show.