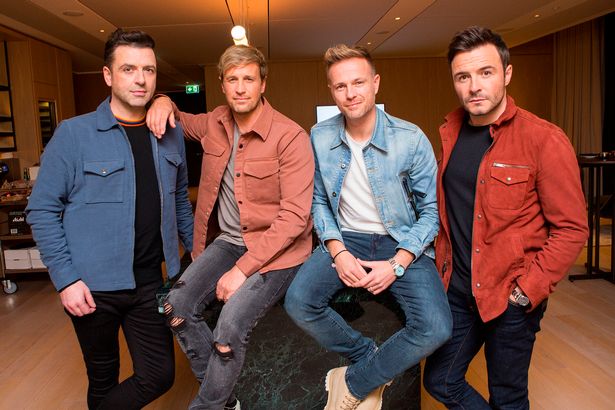 Westlife have teamed up with the team behind some of the music world’s biggest hits for their new upbeat anthem.

Speaking exclusively to Mirror Online about their new single, Mark Feehily, 41, explained how it was great to get back in the studio after a tough time for “so many people”.

“We’re so proud of the new music we’re releasing and proud of Alone Together. It is our first big release of 2022,” the singer told us.

“The album has done phenomenally well too and it is unbelievable to think we’re still getting such an amazing response from fans after all these years.

He added: “Alone Together is a really upbeat song. It is perfect for where we are right now as things start to get back to normal after the madness of the pandemic. It has been tough for so many people but we are now hopefully seeing the light at the end of the tunnel.”

Westlife’s new bop sets the scene for the band’s forthcoming Wild Dreams tour, which will see the pop music icons play to a sold-out Wembley Stadium for the first time – something Mark cannot wait for.

“We’ve got a massive year ahead as a band which will include more music and a tour. It’ll also be the first time we have played Wembley Stadium as the headline act in our entire careers,” the Irish singer said.

“The show is going to be epic. There’s so much work going on behind the scenes to put on an incredible tour, we’re ready to get back out there and see our fans again after such a long time.”

“It’s a fresh, punchy, upbeat song that reflects the energy of where we are as a band right now, releasing great music together and preparing for a major tour,” the lads said when discussing Alone Together.

“It has also been fantastic to reunite with Rami Yacoub who co-wrote the single with us. Rami worked with us at the very beginning of our career so it brings us full circle and it has been amazing to work with him again as well as a number of other super talented writers.

“It is a great single and we think the fans will love it.”

Westlife’s new single ‘Alone Together’ is available to stream and download now.