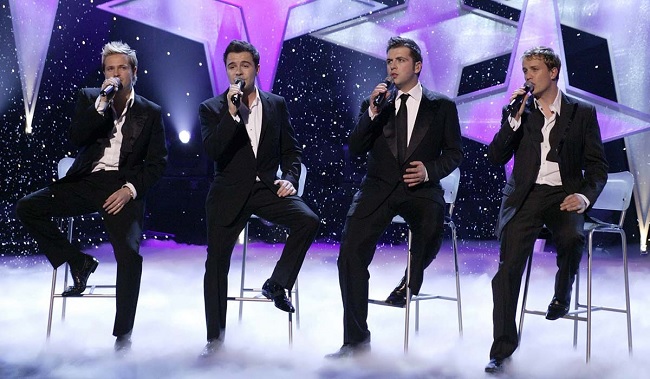 Westlife’s famous key change. It wouldn’t be a Westlife concert without four perfectly-placed stools on a stage, and one hell of a key change.

We all know the move: just as Westlife’s big key change kicks in, the boys quickly stand up from their chairs, and the place goes wild.

It’s such a simple move, but it became the Irish boyband’s signature move, and they still do it to this day, much to the delight of their fans.

Westlife have now revealed just who came up with the famous move..

Speaking to Jenni Falconer, bandmembers Shane Filan and Nicky Byrne revealed it was actually future X Factor judge Simon Cowell who came up with the idea.

Nicky said: “We thought we were good dancers, right? We look at the Backstreet Boys and thought [mimicking the ‘Backstreet’s Back’ dance], ‘We can do this. We can be that.’ And Simon was like, ‘Um… Maybe we should just focus on the ballads.’

“Maybe that was why we didn’t do many up-tempos. If you look at the ‘When You’re Looking Like That’ video, if any other band – your NSYNCs or your Backstreets had sung that, they probably would have done some sort of routine, right?

“We just jumped around as if we were on some kind of crazy-night-out party.”

He continued: “So Simon, when we did ‘My Love’, that was the big single of the second album. And he said, ‘What are we going to do? We’ve got all this TV to do.’ And he says, ‘Five stools. Sit down. And then the key change…”

“We’re like, ‘What’s going to happen? Are we going to get into a dance break?’

Shane said: “It was obviously one of our famous moves, and we still do it. But the reaction from the audience – we didn’t really do anything. We’re just singing the same song, but it just went up half an octave, you know? And then we stood up, and they went ‘AAAAH!’

“We were like, ‘Jesus, he’s right! This is really having a reaction.’ It was like we scored a Beckham free kick in the top corner and we were through to the World Cup every night. It was just so funny. But it worked. And it was our trademark then.”