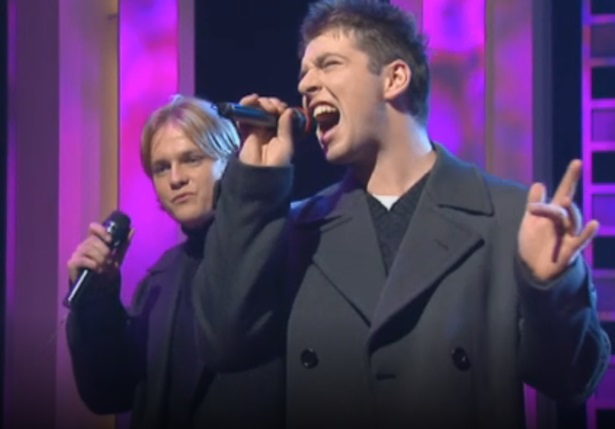 When Westlife were Westside … This throwback clip shows Westlife performing Flying Without Wings under their first name, Westside. This was their first appearance on the Late Late Show in 1998.

With the new single Alone Together proving to be a hit amongst Westlife fans as well as sold-out upcoming tour dates, it’s safe to say that even after a six year hiatus Westlife still holds a special place in the hearts of the public.

With this in mind, we decided to take a look back at where the Westlife boys first started out and stumbled across this throwback clip of their first ever appearance on the Late Late Show in 1998.

Gay Byrne introduced the boys, who at the time were known as Westside, saying: “Now the Late Late Show, as you know ladies and gentlemen, likes to mark the ascent of our rising stars and they look like they could be good.

“A few months ago, a bunch of good looking lads were doing gigs around Sligo , and just three weeks ago under the guidance of the Boyzone band guru Louis Walsh, they cut a 4 million pound deal with RCA. 4 million pounds – and that without even one record to their name. “A team has been put together to groom them into shape for show business. With a mean age of 18 years, they are Nicky, Brian, Shane, Mark and Kian. They’ve already toured the UK supporting Boyzone. They’ve been touted by Ronan Keating as the next big Irish singing sensation. Would you welcome please, Westside.”

Dressed in black and beige overcoats, the future boyband sensation performed their hit Flying Without Wings. After the performance, Gay poked fun at the boys’ outfits, telling the audience: “I think there’s enough hormones floating around there to get a few girlies hearts throbbing. “They work for the corporation though, they don’t take the overcoats off.”

From Westside to Westlife